Keith Cole has had a long and interesting career with the UK Data Service and its predecessors. He retires this month and we wanted to find out about that career and the contributions he’s made in the field.

Firstly, we asked colleagues from the UK Data Service about how they saw him:

Keith has had an exceptional career in what we now call data services or data infrastructure. He always brought the perspective of a data user to our joint endeavours and was an early proponent of opening access to data to the widest communities. In the Economic and Social Data Service, he fought strongly for the promotion of both Census and International macrodata, complementing the energy elsewhere in the Services dealing with survey and qualitative data. Everybody learned from Keith, and I’m especially grateful for all his efforts in motivating staff across the Service, and in motivating users to access the Service. His departure from the Service has left an unfillable gap.

Keith’s expertise has been instrumental in supporting the open data revolution in the UK. Hundreds of thousands of users have accessed internationally important data via platforms, licenses and policies Keith has developed. His focus on engaging with data users, data owners and researchers in policy and academia has guided the transition to open practice across and between sectors. His contribution has supported the foundations of open research and it has been a privilege to learn from him.

Keith leaves a huge legacy, which is obvious to those of us involved in numerous ESRC and Jisc data programmes who have come to rely on his calm, wise and well-informed judgements about service delivery and development. I’m well aware that my own collaboration with Keith on census data is only one aspect, but for us the services he initiated became the standard tools for a generation of users. There is of course a massive community of users who have painlessly accessed data, completed their assignments or undertaken their research in ignorance of Keith’s contribution and I’d really like to express thanks and best wishes for retirement on behalf of them all!

Keith was kind enough to sit down and talk with me about his career, which was fascinating. 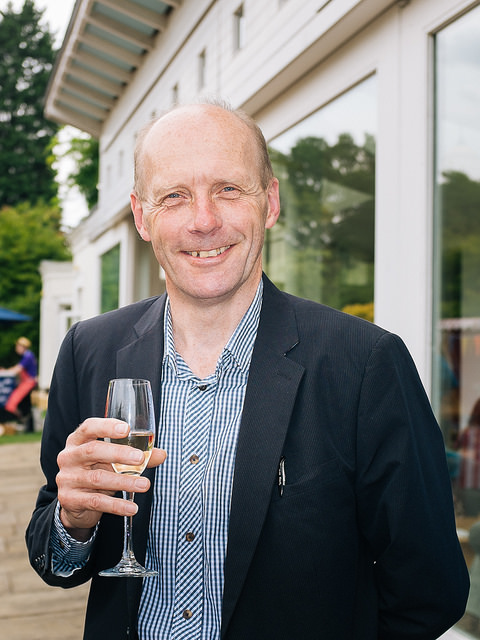 Keith, Census data has been a big driver in your career, hasn’t it?

Absolutely. Although, while a significant part of my career has been concerned with the delivery of UK census data to researchers, I actually started out on the other side of the fence as a data user.

In 1983 I took up a role as a Research Assistant at the University of Salford and needed to access data from the 1981 Census in my work to measure accessibility to public library services for different socio-economic groups. Accessing census data for quantitative analysis in the early eighties was a considerable challenge – one I enjoyed rising to and which led me to support other researchers in using and understanding those data.

After that, I spotted an advert in The Guardian for what turned out to be my dream job which led me to the University of Manchester Regional Computing Centre (UMRCC). At UMRCC, my role was to support access to the 1981 Census aggregate statistics. We’re talking a different time – no email, no web, no internet/Janet. Researchers had to register to access the data on paper forms submitted by post and I had to develop a wide skillset to develop the systems to enable users to submit batch jobs on a remote mainframe to obtain the data needed in usable formats for secondary analysis. Knowledge of hardware systems , programming skills and providing clear documentation were definitely key aspects of the role

Through a Census development programme, ESRC provided additional funding to develop improve access and use of census outputs. As part of that we developed the first web-based interface to 1991 Census aggregate statistics (CASWEB) which made it easier for researchers and also students to access and download census data. I’m also proud that we built on this with the ESRC funded CAIRD project which developed a UK wide set of small area statistics to support UK wide analysis also worked with Prof. David Rind in the early 1990s on an ESRC project to develop a proof of concept online database system that used synthetic individual level census data to demonstrate that it was technically possible to enable users to generate custom tabulations securely and on demand. Now 30 years it is interesting that the Office for National Statistics is developing such a system to deliver 2021 census data.

I’m very proud of the introduction of the International Data Service as part of the establishment of the ESRC funded Economic and Social Data Service (now UK Data Service). When we started the service, very few universities paid the subscriptions required to access data from Inter Governmental Organisations (IGOs) such as the IMF, OECD and World Bank We wanted to reduce the barriers to access to international data for researchers and students by providing a common web based interface to all the data.  There was a lot of negotiating with the various IGOs to establish UK wide data redistribution agreements that opened up access to IGO data to the whole of UK higher education. As a result, we were successful in building a new community of international data users through ESDS/UKDS.

While we offered the IGO stats to UK HE institutions, we were occasionally able to support overseas researchers. I recall the time we helped arrange an Iranian student to access IMF data, sending them a CD. It was a pleasant (and unexpected) surprise when sometime later a sack of pistachio nuts arrived as a ‘thank you’

You’ve seen some changes in your time, haven’t you?

Definitely. I saw the beginning of web era at the UMRCC and helped build Mimas at the University of Manchester, first running the Census Dissemination Unit and later becoming Director of Mimas in 2007. In 2014, Mimas was transferred to Jisc. This move has been a huge success and has brought additional capacity into Jisc to develop and provide digital solutions for Higher and Further Education.

During this time, I’ve seen much greater use of real (and often messy) data in teaching, which I honestly believe is a fantastic driver for skills development and supports employability Alongside this has been the growth of big data and data science, coupled with the use of AI and Machine Learning. This is an area I predict we will continue to see a huge amount of growth in as part of the fourth industrial revolution.  Equally important has been the growing importance of Open Access and the transition to Open Research and I’m proud to have been part of that development through Jisc

On particularly memorable highlight was being invited to give a presentation on the ESRC/JISC Census Programme at an international experts symposium in Pretoria as part of the release of the first post-apartheid South African Census.

If it doesn’t sound too grand a thing to say, what would you consider to be your legacy?

Oh gosh, that does sound grand! But it’s fair to say that I’m proud of the contributions I’ve made to providing access to high quality data and information services to support research and teaching across a range of disciplines and my contribution to the establishment of the UK Data Service. It’s really clear to me that the UK Data Service has made significant difference in supporting research and teaching in the social sciences and beyond. It’s amazing to remember that we’re still providing census and international data after all these years. I definitely feel like I helped create a centre of expertise which many in HE rely on.

I am also proud of what I have achieved being Executive Director of Digital Resources at Jisc since 2015 and the contribution Jisc makes to the UK being one of the most digitally advanced HE, FE and Research nations in the world.

And what will you miss?

A surprising number of things, really. I’m definitely going to miss working with so many talented and committed people and being part of a larger organisation committed to digital transformation.

It’s also going to be strange to feel a bit less connected with the pace of change which seems to be ever increasing. Not that I will lose touch completely – I don’t think I ever could.