Data journeys in a research career: investigating the effect of immigration on the labour market 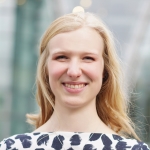 Nina Heyden, a US student on a Fulbright fellowship at the University of Essex, won the university’s 2018 Secondary Data Analysis Award for an MSc investigating the effects of immigration on the labour market. Here she discusses her journey of investigation with the data.

In autumn 2014, my Italian class watched news reels of immigrants on rubber dinghies attempting to find refuge.  It was the height of media coverage of the European migration crisis and my curiosity about what could be done to alleviate suffering was at a peak.  In response to overwhelming humanitarian challenges, the fields of statistics, economics, and data visualization offer me a logical, concrete approach to access the root of issues.  Diving into UN data, I conducted an exploratory analysis of immigration to provide an understanding of trends, using the program Tableau to publish interactive visualizations.

Figure 1 is a screenshot of a map of the total population of concern, a category including refugees, asylum-seekers, internally displaced persons and others of concern to the UN Refugee Agency.  I used the map to explore immigration trends in over 150 countries over six decades (and you can too: https://public.tableau.com/profile/nina.heyden#!/vizhome/TotalPopulationofConcernbyCountryofAsylumCountryofOrigin1951-2014/Dashboard2).  1.6 million Syrians took asylum in Turkey in 2014.  Yet also significant were the 6.0 million internally displaced persons in Colombia in 2014, who were not a focus of international attention.  The graphic reveals that recent migration trends are not an anomaly:

Figure 1. Total population of concern by country of asylum/country of origin, 1951-2014 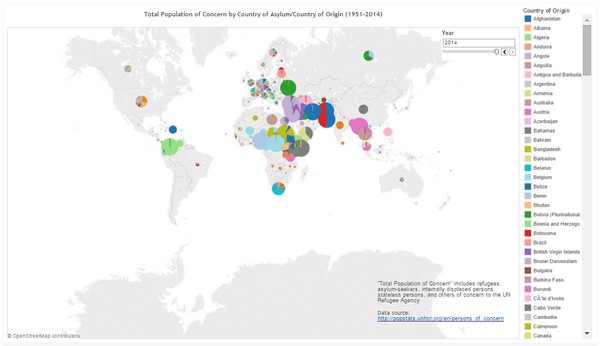 To see trends at a glance, the alluvial flow diagram, Figure 2, captures immigration from the countries of origin (left) to asylum (right) with the highest total population of concern from 1951-2014.  Among the trends encapsulated over the period are: 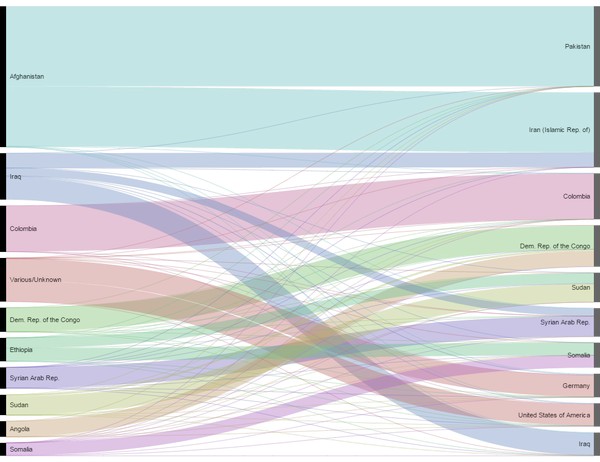 As my studies progressed, I began to examine how immigration impacts developed economies.  In many cases, immigrants help reduce the budget deficit by contributing more in taxes than they use welfare and public services, whereas the reverse holds for the native-born population.  Little evidence suggests that immigrants have negative effects on crime, education, health, or social housing.  Nor has immigration significantly altered employment, wages, and wage inequality in the US or UK (Peri, 2014; Wadsworth 2017).

I was surprised by the next-to-null effects of immigration on average wages for two reasons.  First, the neutral evidence contradicts much of the negative sentiment toward immigration widely publicized.  Perhaps more puzzling, it does not agree with the fundamental supply and demand laws every Econ 101 student learns.  An increasing supply of labour should drive wages downward (Figure 3a).  Yet taking a broader view, the supply shift does not happen in isolation: an increasing population also drives demand for goods and services—and the labour it takes to produce these—outward, reducing negative effects on wages (Figure 3b).  Labour market flexibility is also facilitated when firms invest in technology and when native workers change jobs.

To account for the lack of significant effects of immigration on wages, a growing number of studies propose that immigrant and native workers fill different jobs (Manacorda, Manning, and Wadsworth, 2012; Ottaviano and Peri, 2008; Foged and Peri 2015).  With US data, it was shown that among those with secondary school or less education, native workers tend to be more efficient at communication and cognitive intensive tasks, while foreign-born workers tend to be more efficient at physical and manual intensive tasks.  Immigration creates an incentive for natives to transition from occupations intense in physical tasks to those requiring more communication skills.  Because communication or cognitive intensive occupations typically pay higher wages, native workers shield themselves from competition and potential decreased wages by specialising in the skills in which they have a comparative linguistic advantage (Peri and Sparber, 2009, p. 136).

Applying quarterly data from the UK Labour Force Survey (LFS), I extended the US study to test the impact of immigration on skill specialisation in Great Britain from 2001 to 2010.  The LFS contains detailed data on employment as well as demographic information which allowed for controls.  I linked occupations to a US Department of Labor dataset on task intensity to construct the variable of interest—a communication-manual task intensity index.  For example, financial managers and directors have the highest communication relative to manual (C/M) intensity (3.62), from dividing a communication intensity of 3.99 by a manual intensity of 1.10 (scores range from a scale of 1 to 5).  Elementary construction occupations have the lowest C/M intensity of 0.95, based on communication and manual intensities of 2.64 and 2.77.

Figure 4 shows the positive relationship between the foreign-born (immigrant) share and the relative communication supply of less educated native workers.  Each dot represents one of the following UK government office regions during a quarter between spring 2001 and autumn 2010:

(London is excluded from the scatterplot because it is an outlier in terms of high immigrant supply and high relative communication skill supply; Northern Ireland is excluded from the analysis due to restricted sample size.)  Even without London, the strong, positive association between immigration and relative skill supply is statistically significant.  The correlation supports the prediction that among the less educated, an increase in immigration inflow incentivises native-born workers to supply more communication skills relative to manual skills.

Figure 4. Among workers with a secondary education or less, there is a positive correlation between the share of foreign-born workers and the relative communication/manual supply (C/M) of natives 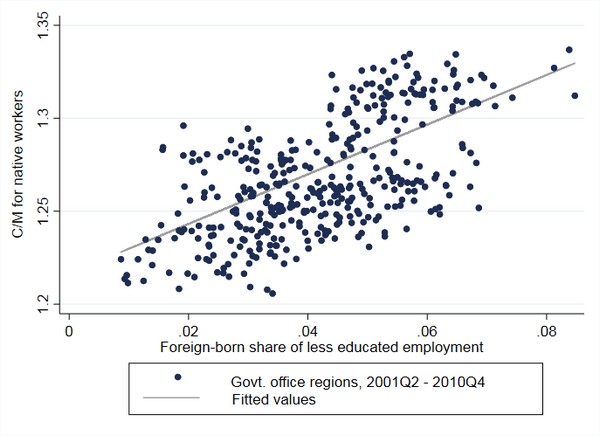 10 of the 12 government office regions of the UK are included; London and Northern Ireland are excluded.
The fitted line is from a least squares regression weighted by less educated employment in the region.

In particular, for each 1 percentage point increase in the foreign-born share of less educated workers, less educated native workers boost their relative communication to manual task supply by 0.62 percent.  This estimate includes controls for variation over time, but not regions which overcompensate for differences in communication and manual scores.  In reality, the change is likely indeed positive, but is probably lower in magnitude, after accounting for regional variation.  The findings are in line with estimates by Börke Tunali, Fidrmuc, and Campos (2017) that from the 2004 EU expansion onward, immigration from A-8 accession countries has generated wage growth among low-skilled UK native workers (p. 7).

I have shared my findings with policy makers as well as researchers tasked with assembling a report for the Migration Advisory Committee.  Moving forward, I strive to continue to highlight trends in data concerning vulnerable populations, in hopes that governments and individuals may benefit from evidence-based insights.

Nina Heyden was the 2017-2018 US-UK Fulbright University of Essex Scholar where she pursued an MSc in Applied Economics and Data Analysis.  She is eager to contribute analysis and visualization of reliable data to engage community leaders, international organizations, and policy makers in fostering social unity and economic prosperity.

Dickerson, A. and Morris, D. (2017) ‘The changing demand for skills in the UK’, IZA Institute of Labor Economics Conference Files.

Ottaviano, G.I.P and Peri, G. (2008) ‘Immigration and national wages: clarifying the theory and the empirics’, National Bureau of Economic Research Working Paper No. 14188.