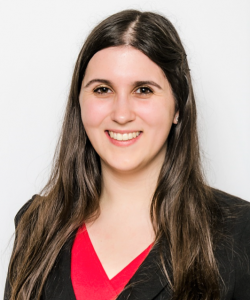 We are delighted to announce Esmeralda Bon, @EsmeraldaVBon as one of our UK Data Service Data Impact Fellows for 2017. Esmeralda is an ESRC-funded PhD student in the School of Politics and International Relations at the University of Nottingham, in collaboration with the Committee on Standards in Public Life (CSPL), an advisory non-departmental public body sponsored by the Cabinet Office. Esmeralda is affiliated with the Centre for British Politics and the Nottingham Interdisciplinary Centre for Economic and Political Research (NICEP).

My research focuses on the political communication of UK public office holders and civil society actors, with special attention for the use, presence and absence of types of evidence and emotions. I hold a liberal arts and sciences BA (hons) in the Humanities and Rhetoric & Argumentation from University College Roosevelt and a MARes and MScRes from the University of Amsterdam, in Rhetoric, Argumentation Theory and Philosophy (political argumentation specialisation) and Communication Science (media and journalism/political communication specialisation). These two masters were research oriented and covered the use and application of qualitative, quantitative and data scientific (computational) methods to scientific research.

I’m particularly interested in the application of machine learning to large scale text analyses (big data) and using R programming for the analysis and dissemination of reproducible research (data).  I hope to contribute to political science and politics in practice, by addressing the desirable behaviour standards of public office holders, as well as to the development of (interdisciplinary) research methods.

My PhD project concerns a study of the creation, spread and processing of the political communication of public office holders and citizens and how this affects public opinion in general and voting behaviour more specifically. I’m looking at the digital manifestations of forms and practices of political communication in relation to social networks, with a specific interest in the communication of UK public office holders. This is because I collaborate with the Committee on Standards in Public Life (CSPL) with a remit to investigate and promote public probity. This Committee is currently also concerned with standards of local government and has a key interest in the consequences and causes of the Brexit vote following the recent (June 2016) EU referendum. As a result, to meet both my interests as well as those of the Committee, my PhD project currently revolves around the political communication practices and content from the EU referendum campaign last year.

My research also crosses disciplinary boundaries: my PhD project will, for instance, include insights from argumentation analysis (the pragma-dialectical approach more specifically) and incorporate methods from the fields of communication science and (through the application of computational methods) data science, hopefully giving rise to an approach to text-analysis that is in-depth, well founded as well as well rounded. By applying and combining (my knowledge of) these methods in novel ways, and using my supervisors’ methodological expertise, I hope to contribute both to knowledge in my field as well as to the development and improvement of social science and interdisciplinary research methods.

Among the data to be subjected to these analyses will be those I will collect (and have been collecting) through web scraping social media networks such as Facebook and Twitter, using their APIs, as well as data in the UK Data Service collection, including the British Election Study (BES) surveys. One of my PhD supervisors, professor Cees van der Eijk, is part of the BES team. We frequently look at and analyse the BES data together, both for my work for the Committee as well as for my research, since these surveys measure British public opinion. We have specifically been looking for trends and changes in relation to the perceptions of the behaviour of political parties and the political attitudes of the British citizens more generally, investigating how and whether to link these findings to external political events and developments in the UK.

Second, for the Committee on Standards in Public Life (the CSPL) I have been studying their ‘Public Attitudes towards Standards in Public Life’-surveys, some of which are likewise in the UK Data Service collection (e.g. Survey of Public Attitudes towards Conduct in Public Life, 2003-2004). These surveys address the perceptions of people in Great Britain with regards to the behaviour and standards of public office holders and thereby relate to the BES surveys. I am looking at this survey data to gain insight into the actual perceptions of the British citizens of the public office holder behaviour, to connect this to public opinion in Great Britain more generally and thereby combining the insights gained with those taken from the analysis of the BES survey data. At the same time, I am using the resulting information for consulting with the Committee, through the drafting of research reports, and for my own dissertation.

In addition, I also intend to use the British Social Attitudes Survey, which has been long running like the BES. I aim to analyse the data provided by these surveys in the very same ways as previously described and, in the end, I am also truly looking forward to finding and using more complementary datasets and surveys provided by the UK data service in the near future.

I intend to use the Fellowship to attend both domestic and international conferences in my field (political communication, public opinion, political science, communication science, computational communication science, computational social science), giving talks and attending both inter-university and regional events. I also hope to undertake media and research methods training, to improve my research and gain further knowledge of the interdisciplinary application of methods, with the aim to disseminate this higher-quality information and knowledge through my website and social media. This is because I believe that complex methodological and quantitative information is mostly – and potentially most successfully – communicated online, where exercises, datasets, etc can be uploaded and downloaded. The final 15% would be spent on activities such as giving talks and attending both inter-university and regional events. The latter two could contribute to networking as well as the forging of further interdisciplinary collaborations and partnerships.

Esmeralda Bon
See other posts in this category