As data become an increasingly important element within the scholarly record there is widespread recognition of the need to easily locate original datasets in order to verify, reproduce and subsequently build upon this research. Despite efforts in this area (for example, see an early paper – We Need Publishing Standards for Datasets and Data Tables written by Toby Green, Head of Publishing at the OECD back in 2009) standards for citing data are still not widely enough embedded in researchers’ practice and more work needs to be done to #CiteTheData.

Last year the UK Data Service launched its #CiteTheData campaign, noting that “the citation of research data (and metadata) can support the understanding and promotion of research impact through the tracking of the use of data in research and on into policy and product development, influencing decisions about public and commercial spending and service provision.” It’s important that data are cited accurately and consistently because they are a vital part of the scientific research process, enabling easy reuse and verification of data, citation allows the level of usage to be monitored and the impact of data to be tracked. Citation also recognises and rewards data producers.  The @UKDataService is holding a Data Citation webinar on 29th Feb 2016 explaining how to cite data from the UK Data Service collections and show how easy it is to produce citations in multiple formats. Join the webinar to find out more about citing data.

Back in 2010 the international team at the UK Data Service began making data citation information available for download with international data.  This data citation information included Digital Object Identifiers (DOIs) minted via DataCite UK at the British Library. The DOI is a string of numbers and letters which provide a means of persistently identifying an object on a digital network – thereby allowing subsequent researchers to find the identical data used in that research. So, for example, if an interested researcher found a chart which cited IMF Direction of Trade Statistics (DOTS) with a DOI – ‘10.5257/imf/dots/2015-11’, they would simply use a DOI resolver (e.g. http://dx.doi.org/) to take them to a web page (aka landing page) which would provide information about how to access the IMF DOTS at the UK Data Service.

Over the last 5 years, many researchers have citied the data using the UK Data Service DOI information and we’re now able to start tracking the usage of the international data we provide access to in a new feature in UKDS.Stat.  We’re in the process of embedding a link  – ‘See articles on Google Scholar citing this dataset’ into the metadata of each of the datasets made available via UKDS.Stat.

The embedded link lets users carry out a quick and easy search identifying research articles that have cited that particular dataset (the results will show research articles that have cited data accessed via UK Data Service).  We’re really excited about this new feature as it allows us to see a direct link between the work we do making the data available and the research that’s produced.  We’re also very hopeful that this will provide opportunities for researcher collaboration and also help to prevent duplication of research. 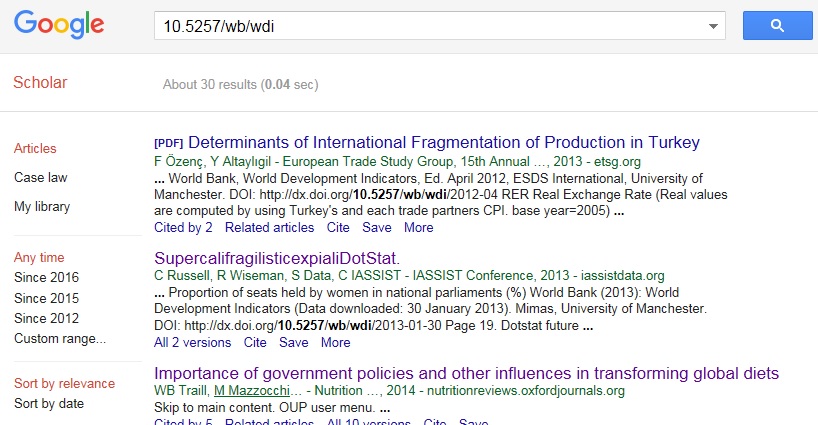 See more about the UK Data Service #CiteTheData campaign, cite your data usage with the hashtag on Twitter and join us at our Data Citation webinar on 29th Feb 2016.

#CiteTheData
See other posts in this category