Daniel Laurison and Mike Savage, Department of Sociology, London School of Economics, discuss the Great British Class Survey and the exciting possibilities for research and policy now it is available from the UK Data Service.

The Great British Class Survey (GBCS) is probably one of the most talked about data sets of all time. Around nine million people have clicked on the BBC’s Class Calculator to see which of the new seven classes they fit into, using our classification inspired by Pierre Bourdieu’s conception of economic, social and cultural capital. The academic article – available on open access – which explained these seven classes, has broken download records and inspired an intense academic debate about the nature of social classes in the journals Sociology and Sociological Review. 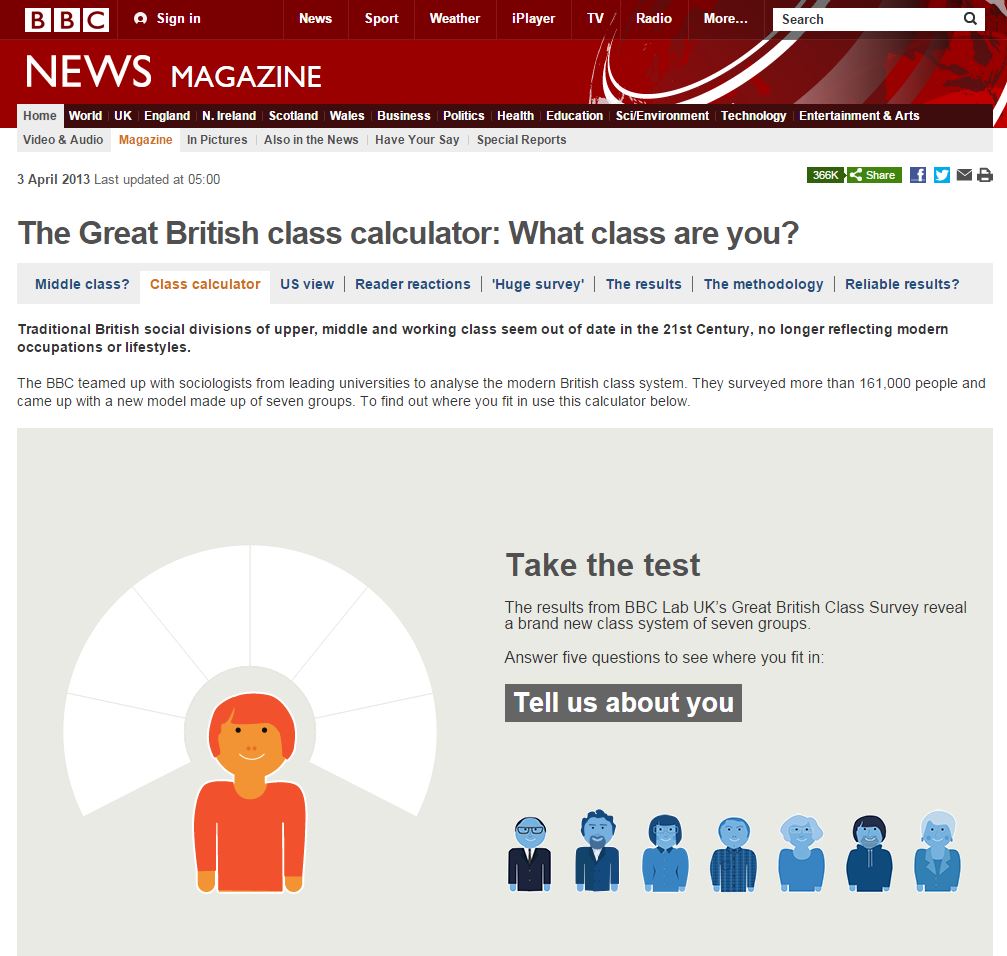 The GBCS has also been one of the most controversial data sets of recent years. It was a web survey hosted by BBC’s Lab UK website which ran from January 2011 to July 2013, by which time 325,000 people responded, making it the largest data set in the world specifically focusing on social class. However, the nature of this source means that there is a huge sample selection bias, with the respondents being predominantly drawn from the well-educated professional and managerial groupings – indeed those who tend to watch BBC TV and listen to BBC radio. For some critics, this fact disables the GBCS from having any scientific value.

And indeed, this sample skew explains why our new model of social class largely drew on the small representative national sample which we persuaded the BBC to conduct to allow us to base our model on representative data. These data are also now available from the UK Data Service along with the web survey itself.

And what data the GBCS has! While the non-representative, self-selecting nature of the web survey makes formal statistical inference impossible, the large sample size makes it possible to mine down at minute scale and explore specific issues which smaller surveys can rarely unravel.  Any group at the higher end of income, occupation, or education scales is present in this data in very large numbers.  There are 34,245 respondents who report household income over £100,000 per year. Nearly every professional and managerial occupation has over 100 respondents, and many have thousands: there are 3,440 CEOs, 4,978 doctors, and 13,759 primary and nursery teachers. Most of the large universities have several thousand graduates who responded, so researchers can look in detail at the profiles of particular universities (when the Special Licence version becomes available). This throws up exciting possibilities for the kind of focused analysis which might allow the study of social class to operate on a more granular and detailed level.

Over the coming months, publications will be appearing which use the web survey, taking advantage of geographical patterns; specific occupational profiles; how far attendance at particular universities is associated with social class, all of which can be examined in ways that are not possible with traditional representative surveys. While these analyses cannot be used for formal statistical inference, comparable research on other data sources has replicated some patterns from the GBCS. For example, analyses reported in Friedman et al. 2015 (forthcoming from Sociological Review) have been replicated using nationally representative Labour Force Survey in Laurison & Friedman 2015 working paper on ‘Introducing the class ceiling: social mobility and Britain’s elite occupations’.

For all these reasons, anyone excited by the potential – and the problems – of ‘big data’ should find something of interest here.  So we are delighted that the GBCS is now available for use by higher and further education researchers all over the world. Critics and enthusiasts alike will be able to come to their own views as to the value of the data here and we have no doubt at all that a vigorous debate will be joined, which can only enhance the public awareness and interest in the understanding of social class today.

Let us finally say that we are pleased to have played our role in making this data set public. One of the most exciting things which the GBCS has taught us is the value of collaboration between academic and non-academic bodies to enable innovation. The BBC paid for the survey to be conducted, but had no resources to assist with the analysis of the data (which was undertaken by a large research team based at the LSE, and the universities of Manchester and York), or the archiving. Most of the extensive administrative work involved in coding free text occupational and university titles was instead undertaken by Daniel (funded by the ESRC through Mike’s Professorial Fellowship) and the UK Data Archive. We would also like to thank Andy Miles (University of Manchester) for his advice on occupational re-coding and Paul Wakeling (University of York) for working on the University titles. This has been an amazing collaboration. We would therefore like to thank the BBC, ESRC and UK Data Service for putting in resources to make this deposit possible and for allowing this data to become a public resource.

And now, over to you!