Taking Brexit to the Data: Which Sectors are Most Exposed to ‘No Deal’?

Oliver Exton explores the potential impacts of a ‘no deal’ Brexit on exports by UK firms.

When Britain voted to leave the European Union on 23rd June 2016, it represented a significant switch in the trade policy regime facing UK firms.

The future trading relationship between the UK and the rest of the EU (as well as the UK’s trading relationship with all other countries in the rest of the world) is still uncertain. In particular, there is a considerable risk of a ‘no deal’ scenario, where Britain would collapse out of the Customs Union and Single Market and revert to trading with the EU under World Trade Organization terms.

Despite the possibility of this extreme scenario, as stressed in the UK Parliament Select Committee hearing on 6th December, there is a dearth of analysis on the sector-level risk to exports of a ‘no deal’ scenario.

In recent research I (along with my co-authors Giancarlo Corsetti, Meredith Crowley and Lu Han in Corsetti et al, 2017), conducted a detailed analysis of the exposure of UK exports to EU tariffs under a ‘no deal’ scenario. We identified, by product classification, the value of UK exports to the EU facing different levels of trade policy risk.

Our analysis focuses on the two most pressing and quantifiable sources of trade policy uncertainty facing firms in the UK following statements by both the UK and EU that ‘no deal’ is a realistic potential outcome.

First, exports from the UK to the EU will face Most Favoured Nation tariffs if the UK reverts to trading only as a full member of the WTO, without a Free Trade Agreement.

The highest tariffs and quotas the EU will impose on imports from the UK in a ‘no deal’ scenario are determined by the EU’s WTO commitments. This is because UK is a full member of the WTO and has the right to remain a member of the WTO after leaving the EU. This means that some products will be able to enter the EU tariff-free, but others might be subject to the same high tariffs or restrictive quotas faced by other third countries such as China.

Second, leaving the Customs Union will also expose firms in the UK to the risk of anti-dumping orders imposed by the EU under the World Trade Organization’s rules on unfair trade.

UK exporters face the risk of special EU tariffs under the WTO’s antidumping or anti-subsidy rules. The EU is one of the most active users of trade remedies in the world, with 8.1% of imported products subject to a trade remedy over 1995-2013. Previous EU antidumping measures have targeted imports from high-income countries including Australia, Japan, Norway, Singapore, South Korea, and the US. With exit from the EU, the risk of more special tariffs is set to grow.

The graphs below use data from the WTO (World Trade Organization, 2017) and the World Bank (Bown, 2017) on product-level tariffs, quotas and trade remedy measures along with trade flow data from UN COMTRADE (United Nations Statistical Division, 2017) to quantify the trade policy uncertainty facing firms exporting from Britain to the EU. We use data on UK exports to the EU in 2015 and provide two granular breakdowns of this trade policy risk.

Here we provide a breakdown based on product classification. 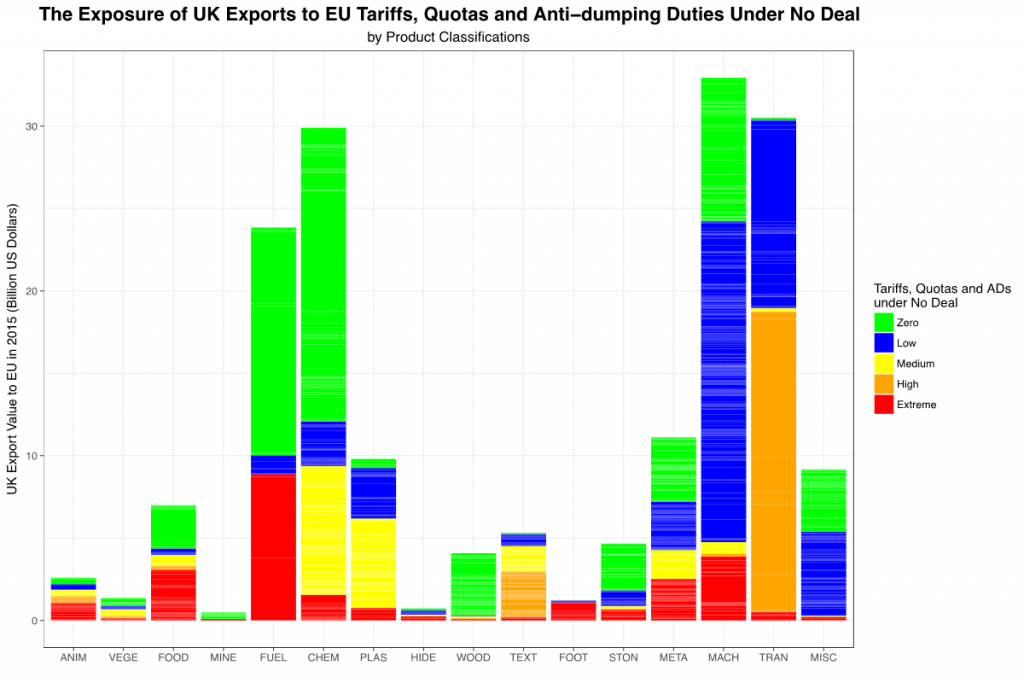 And here, we organize the same information into UK Standard Industrial Classifications to show which industries are most exposed. 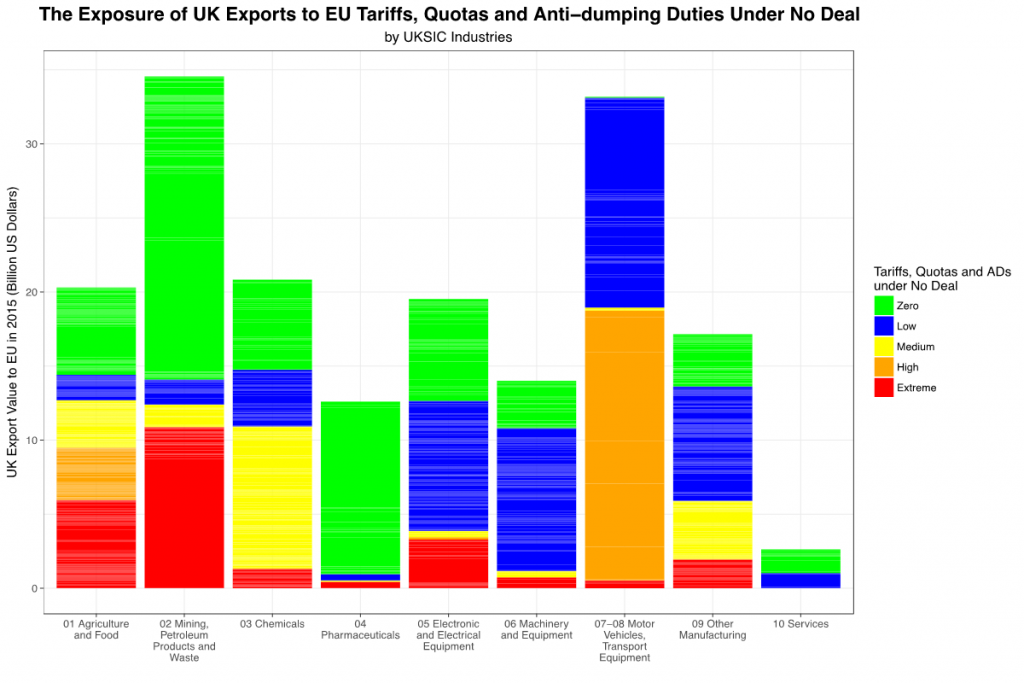 To start with the good news, we calculate that 34% of UK exports to the EU will remain tariff free under a ‘no deal’ scenario (represented by the green bars in the figures), as long as the UK remains a member of the WTO.

From the first graph, we can see that these tariff-free exports are largely in fuels and chemicals. The second graph refines the large chemical product group into chemicals and pharmaceuticals and shows that most pharmaceutical exports will enter the EU duty-free even if the UK leaves the EU without a deal.

The bad news is that 27% of UK exports face high or extreme trade policy barriers in a ‘no deal’ scenario (this is represented by the sum of the orange and red bars in the figures).

Products facing a risk of high or extreme trade policy barriers are predominantly concentrated in high-skilled and technologically advanced manufactured products including transportation equipment and machinery.

In our ongoing research, we take these measures of trade policy risk facing UK firms to microdata to estimate the impact of the tariff risk on economic activity. Economic models predict that when firms face an uncertain environment, they will ‘wait and see’ rather than making investment choices today.

First, we aim to identify whether the switch in trade policy regime resulting from Brexit has affected entry and exit in firm exporting decisions to the using the HMRC Overseas Trade Statistics (HMRC, 2017). 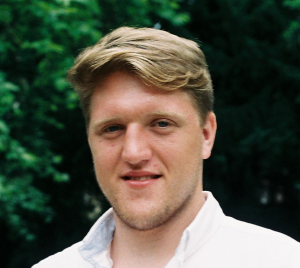 Oliver Exton @oliver_exton is one of our UK Data Service Data Impact Fellows for 2017. Oliver is an ESRC funded PhD student in the Faculty of Economics at the University of Cambridge whose research focuses on firms and workers in international trade.