Liz Smy from the UK Data Service explores the UK private rental market through researchers’ analysis of data in the English Housing Survey.

Housing is a topic of national interest. The housing market has changed dramatically over the last 10-20 years, especially in the private rented sector. The English Housing Survey is a continuous national survey commissioned by the Department for Communities and Local Government (DCLG).

It collects information about people’s housing circumstances and the condition and energy efficiency of housing in England. English Housing Survey data has been used by many researchers to explore housing in England, and in more detail the private rental market.

The social rented sector accounted for 3.9 million or 17% of households.

The private rented sector accounted for 4.5 million or 20% of households. It is this sector where there has been a large increase in the last 10 years.

In 2005-06 there were only 2.4 million or 12% households renting privately. In 2011-12 it became more common to rent privately then to live in the social rented sector. This change in tenure has led to lots of research into the private rental sector, looking at the demographics of these new private renters and the characteristics of the households. 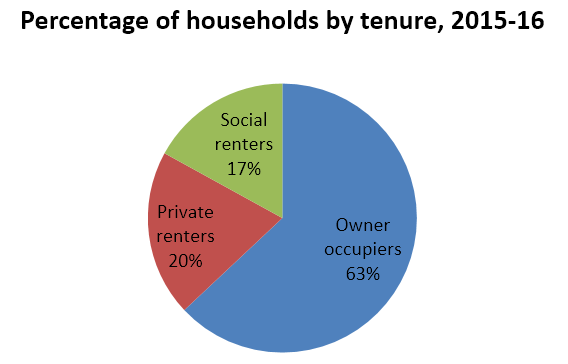 A Citizens Advice report in 2015 produced with the think-tank the New Policy Institute, explores how renting in England has changed dramatically in the past few decades.

The research uses English Housing Survey data to investigate who lives in private rented homes and how the demographics of the renters have changed. All age groups have seen a rise in the number of people renting so the private rented sector is no longer dominated by young or single households, although households headed by 25-34 year olds still form the largest group. Half of privately rented households are headed by someone aged 35 and over, and couples with children are now the most common family type in the sector, in 2013-14. The research also assesses the physical state of private rental properties and look at the cost and affordability of the sector.

Researchers at the Institute for Fiscal Studies have completed detailed research looking at the cost of housing for low-income renters.

They have used Secure Access English Housing Survey data along with data from the Family Expenditure Survey  to explore trends in housing tenure over the last two decades.

The proportion of people renting in Great Britain has increased from 29% in the mid-1990s to 35% in mid-2010s. This growth has been entirely in the private sector rather than the social sector with the proportion of people renting homes privately increasing from 8% to 19% over the same period. This increase is more marked in 25 to 34 year olds, with 37% now renting privately, compared to 12% two decades ago.

However renters are paying considerably more for their homes than 20 years ago. The average (median) private rent paid in the mid-2010s was 53% higher than that in the mid-1990s in London and 29% higher in the rest of Britain. These higher rents paid do not seem to be explained by improvements in the quality of rented properties. Low-income renters spend a higher portion of their income on rent than higher-income renters, even after accounting for the help they get through housing benefit.

The researchers also look at the impacts of housing benefit reforms and predict future implications for tenants.

The Resolution Foundation have used data from the Labour Force Survey, the Family Expenditure Survey, Households Below Average Income and the English Housing Survey  to compare the housing outcomes achieved by different generations over their  life course and assess the extent to which intergenerational inequalities exist when it comes to security,  affordability and quality of housing.

Their research also showed that young people in Britain are spending three times more on housing than their grandparents did. Those now in their 70s and 80s spent just 7% of their annual income on housing at the age of 30. The baby-boom generation – now in its 50s and 60s – spent 17% of income at the same age. However, millennials – those now in their 20s and 30s – spend 23% of everything they earn on housing costs.

The Centre for Microdata Methods and Practice (CEMMAP) published research using Secure Access English Housing Survey data from 2008-2012 to estimate a simple model of the supply of housing to the rental and owner-occupied housing markets in London.

They found that location, structure and unobserved quality (which includes features such as layout, architectural style, quality of kitchen, garden etc.) are important for understanding housing prices, rents and selection. Structural characteristics and unobserved quality are important for selecting whether a property is owner-occupied or rented but location is not. Housing units with high value physical attributes (large or detached dwellings) are more likely to be owner-occupied. These larger properties yield higher rent-to-price ratios than smaller properties.

However despite their relatively high gross yield in the rental sector, properties with high value physical characteristics are less likely to be bought up by landlords and supplied to renters. This is consistent with theories of contracting frictions over maintenance and upkeep of the property.

The highlighted research show how the English Housing Survey data can be used to explore the trends in the private rental market. The wealth of data, on many aspects of housing, can be explored in a variety of ways to look at very detailed research questions or national trends. Including data from other social surveys can add extra depth to research.

The government published a White Paper on 7 February 2017 called Fixing our broken housing market which detailed plans to tackle England’s housing crisis. It described the government’s commitment to boost housing supply and meet long term housing need. The emphasis of the Paper was on four areas:

The consultation outcome was published in March 2018 and coincided with the Prime Minister launching a major overhaul to the National Planning Policy Framework in England to deliver more homes for everyone. The planning reforms aim to provide ‘a comprehensive approach for planners, developers and councils to build more homes, more quickly, in the places people want to live’.

Liz Smy is a Data Curation Officer for the UK Data Service. She forms part of the highly-specialised Data Curation and Publishing team and focuses on preparing longitudinal microdata and SecureLab data for preservation and secondary use.