Data journeys in a research career #6: Rachel Oldroyd – Serendipity in a career in understanding foodborne illness with spatial data

Rachel Oldroyd, @r_oldroyd, UK Data Service Data Impact Fellow and Quantitative Human Geographer at the University of Leeds, shares her journey into the world of geographical data and developing a career in understanding foodborne illness with spatial data.

Albert Einstein once said “If you can’t explain something simply, you don’t understand it well enough” but I have to admit, I often struggle when asked this question. Mainly because my area of work is so inter-disciplinary (a combination of geography, social science, statistics and computing) and also because it isn’t a well-known discipline (I’m always envious of my husband who doesn’t have to explain what a Secondary School Teacher does). So, torn between giving a full blown explanation of my whole PhD project and an overview of the world of Geographical Information Science (GIS), which I teach part-time at the University of Leeds, my usual answer is “I work with spatial data”. This is tactful, because it gives the person an out if they don’t want to commit to a conversation they may consider boring for the next five minutes and instead we can move onto talking about the weather or the cute puppy that just walked past.

For genuinely interested parties I would explain that my research entails using restaurant review data to identify and map outbreaks of foodborne illness (as opposed to traditional GP data which is associated with a myriad of problems) but that I’m also exploring the spatial patterns of populations at risk (where do vulnerable people live). I may also explain that a GIS is a type of software used to “analyse and map data to make inferences about the physical world and the people living in it” and that it’s an invaluable tool for my research and across many other fields.

So let’s consider populations at risk. Tobler’s first law of Geography tells us “everything is related to everything else, but near things are more related than distant things” so it makes sense that geographical areas can be grouped together based on the socio-economic characteristics of the people living within them. These characteristics might relate to deprivation, ethnicity or age for example. In 2006, Dan Vickers devised a well-known classification grouping together output areas, but many other classifications exist based on the same principles. Classifications are used extensively in geospatial research and beyond; from resource allocation and retail planning to crime prevention.

In the context of foodborne illness; elderly people, pregnant women, young children and immune-compromised individuals are not only more likely to contract foodborne illness but they are also more likely to suffer severe side effects due to their weakened immune systems so identifying where they are likely to live is important from a policy perspective. But vulnerable individuals are not the only ‘at risk’ populations. Healthy persons may also be at risk based on their physical environment and behaviour. Populations who frequently eat fast food and live within close proximity of unhygienic food establishments maybe at higher risk of contracting foodborne illness than those who do not eat takeaways regularly. Similarly, healthy people who undertake unhygienic food practices are more as risk then those who abide by food hygiene recommendations.

According to research by the University of Cambridge, Blackburn has the highest number of takeaways per resident than any other borough in England, in fact it has a staggering 236 takeaways (2.6 for each of the 625 people living within its central borough)*. Offering extremely cheap prices in one of the most deprived areas in the UK, it is no surprise that Blackburn’s takeaways have become a staple part of the local residents’ diet, putting them at greater risk of contracting foodborne illness. With so many takeaways in business, the likelihood of residents living near (and eating at) one with a low hygiene score increases and it also becomes difficult for the local food safety teams to undertake inspections. 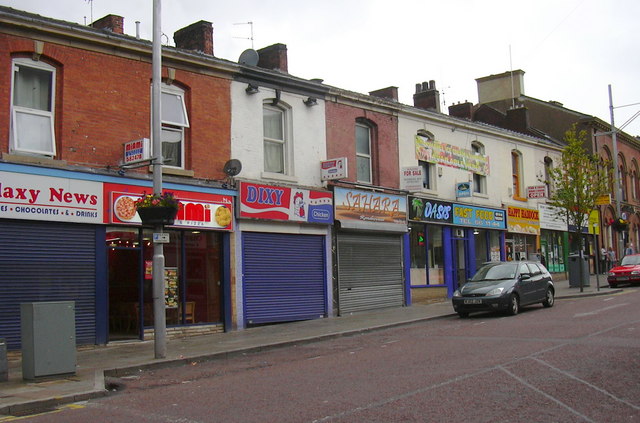 © Copyright Robert Wade and licensed for reuse under the Creative Commons Licence.

“How did you end up doing that?”

Again, this isn’t a particularly easy question to answer, but it’s something which I often consider. My journey into the world of geographical data was certainly the result of a series of circumstantial events. I didn’t ever have a burning desire to work in a quantitative field, but as my favourite subject at school was Geography and I was good at Maths, a career working with spatial data is actually quite logical. The proliferation of data over the past few years has led to a rise in GIS and geospatial  jobs, the number of which is projected to rise by 30% by 2020 (ESRI, 2017). Thinking back, as a teenager I actually wanted to be a secondary school teacher as I thought that this was the only Geography related career there was (how wrong I was!), so without any other real plan I applied for and accepted a place studying a Geography and Education degree at University.

Not getting the A-Level grades I needed for this course was actually one of the best things that could have happened at this point (or I may have actually become a Geography Teacher!). I was forced to look at alternative options for Higher Education and I was offered a place on the BSc in Geographical Information Science programme at Newcastle University. This is where my spatial-data journey began. Covering all aspects of Geographical Information Science from collecting, processing and visualising data through to coding bespoke tools and applications, this degree was completely different to anything I had done previously and I became fascinated with the world of data. And the rest, as they say, is history. Upon graduation I continued onto an MSc in Computing Science to further develop my programming and analytical skills and then held a position as an outreach officer for a short period of time, raising awareness of the importance of quantitative skills and GIS in schools.

From accepting a job at the University of Leeds four years ago to starting my part-time PhD in September 2015, I’ve found that quantitative and programming skills are essential for my everyday work, from analysing large survey datasets in R to using GIS to map census data. I would encourage anyone interested in working with data or entering the world of research to learn basic programming skills and statistical analysis.