We are delighted to announce James Cockett as one of our #DataImpactFellows for 2019. 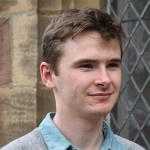 James is a Research Economist at the Institute for Employment Studies (IES), a research institute based in Brighton. He joined IES in July 2017 after completing his first degree at the University of Sussex. James’ research interests include education (especially higher education) and the barriers facing disadvantaged groups in the labour market.

Since starting at IES, James has worked with a variety of administrative data, nationally representative survey data, bespoke survey data and management information systems. James is confident in applying a range of econometric and statistical techniques and is a user of several quantitative software packages including Stata. James works within a small team of economists within a wider organisation of mainly mixed methods and qualitative researchers carrying out research for UK public policy clients, European bodies and employers, undertaking analyses in the fields of employment, labour markets, health, and social policy. Recent work includes econometric analysis of progression in employment for the JPMorgan Chase Foundation and econometric modelling of the legal sector workforce for the Law Society of England and Wales.

James has worked on a number of projects using methods designed to identify the causal impact of policy interventions. These have included a project for the European Commission which estimated the impact of a policy to reduce long-term unemployment in Catalonia.

James is currently evaluating the effect of the introduction of the National Living Wage (NLW) and changes in the National Minimum Wage (NMW) on employment and hours. The project involves analysis of the Labour Force Survey and the Annual Survey of Hours and Earnings, funded by the Low Pay Commission. James is also analysing a survey of EU staff in Higher Education for the Department for Education, looking at career trajectories and institutional strategies in response to the UK’s decision to leave the European Union.

I am an early career economist working in applied research at the Institute for Employment Studies. The Institute’s research informs responses to social problems and has an impact through firms, individuals and policy makers, such as government departments and agencies.  Much of my research is commissioned for the express purpose of identifying the causal impact of public policy interventions for funders in local and central government and provides insights directly to stakeholder and policymakers, including Government departments. This presents me with many opportunities to use the data and resources provided by the UK Data Service.

Over the next two years I am likely to work on a wide variety of projects using UK Data Service data. I will have the opportunity to disseminate research findings through UK Data Service impact blog posts and this will be used to widen the audience for my work, and the range of datasets held by the UK Data Service. I will also use my Twitter account (@JamesCockettIES) and LinkedIn to disseminate my research. This is in addition to presenting findings to key stakeholders and clients who fund the research.

My current project for the Low Pay Commission (LPC) provides the best example of how UK Data Service data are used in my research. This project has a direct impact on policy-making. The research will help the LPC to make recommendations on appropriate future rates of the National Living Wage (NLW) and the National Minimum Wage (NMW). In 2018, increases in the NLW and NMW directly boosted the wages of 1.9 million workers and commissioners rely on robust econometric analyses to inform their decision-making.

So far, I have used the longitudinal Labour Force Survey (LLFS) to estimate the impact of the introduction of the NLW and change in the NMW on employment and hours, including the impact on young workers. The next stage of this project will make use of the Annual Survey of Hours and Earnings (ASHE). I am an ONS accredited researcher, allowing me to access highly-sensitive individual-level data in a secure and safe manner.

My work for the LPC has resulted in a number of outputs so far. The interim report, which included a detailed methodology and preliminary findings, was published in February. Findings from the research were included in the 2018 LPC report, published in November 2018. Alongside my co-authors, I presented findings based on analysis of the LFS at the LPC Research Workshop on 1 April 2019. I also attended the ‘20 years of the National Minimum Wage’ event which provided an insight into the decision-making process and the challenges faced by the LPC since the introduction of the NMW in 1999. I am likely to work on many other projects using UK Data Service datasets to inform policy-making over the lifetime of this award.

James Cockett
See other posts in this category