We are delighted to announce David Kingman as one of our #DataImpactFellows for 2019. 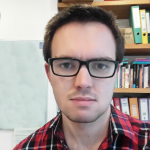 David Kingman is the Senior Researcher at the Intergenerational Foundation.

David is a quantitative senior researcher and data analyst with a wide range of interests including population demography, economics, inequality, housing, pensions, higher education, political representation and wellbeing in his current role as Senior Researcher at the Intergenerational Foundation (IF). The IF is a non-party-political think tank which researches intergenerational fairness. David holds a BA Geography degree with First-class honours and an MSc with Distinction in Spatial Planning from UCL. He is responsible for day-to-day management of IF’s research projects, including research design, accessing relevant data sources, undertaking data analysis and producing insightful, newsworthy research reports.

David is proficient in a wide array of statistical research methods, with extensive experience of using the R programming language, Microsoft Excel and Quantum GIS to derive insights from datasets and produce high-impact data visualisations. He has experience of working with data from most of the UK’s major household surveys and using Big Data sources. He produces a wide range of publications, including research reports, submissions to public consultations, internal briefings and blog posts for a wide variety of both expert and non-expert audiences, including politicians, policy-makers, IF colleagues, the media and the general public.

I wanted to become a 2019 Data Impact Fellow because I am passionate about using data to highlight social injustices and to produce insights which hopefully lead to more effective evidence-based government policy decisions.

I am currently the Senior Researcher at The Intergenerational Foundation (IF), which is the UK’s only non-party-political think tank which exists to research intergenerational inequality (registered charity no.1142230). Founded in 2011 and independent, IF is funded by no-strings-attached donations from private individuals, trusts, foundations and corporate partners. Our research is regularly quoted in the national media, and we believe we can claim significant credit for moving the issue of intergenerational fairness up the political agenda over recent years.

I originally became involved with the Intergenerational Foundation (IF) as a part-time researcher while I was studying towards my BA Geography degree in 2011, when IF was first being established, and I have stayed with IF ever since. In this role I have overall responsibility for setting IF’s research agenda and I design and undertake most of IF’s research projects, in addition to overseeing research which we commission from external authors. My research with IF covers a broad spectrum of areas, including housing, employment and the labour market, pensions, saving, higher education, political representation and multidimensional wellbeing.

I really enjoy learning about and playing around with new research methods and data sources. I currently do most of my work for IF using the R programming language, Microsoft Excel, QGIS, GitHub and Google Cloud, and I am particularly interested at the moment in the potential for integrating R, SQL and Google Cloud to generate original insights from analysing very large datasets. I am also very interested in using R to create effective data visualisations which can convey complex research findings to a wide variety of audiences in a user-friendly manner, including building interactive data visualisations through integrating R with the Shiny framework.

I frequently use data which is archived by the UK Data Service in the course of my research into intergenerational inequality. Below are three examples of major research reports that I have previously published which used UK Data Service data:

IF wanted to see whether the quality of life of young adults is lower for today’s generation than it was for previous cohorts by creating a multidimensional wellbeing framework which included five elements – Economic Wellbeing, Health Wellbeing, Relationship Wellbeing, Environmental Wellbeing and Belonging Wellbeing – and then measuring how they’ve changed for the 20–29 age group using data from the 1995 and 2005 British Household Panel Surveys and the 2015 edition of Understanding Society. We found that overall wellbeing declined by 10% for young adults between 1995 and 2015, and there were much larger than average declines in both Health Wellbeing and Relationship Wellbeing throughout this period. This represented the first iteration of a project which we intend to turn into an annual publication to investigate how objective wellbeing is changing over time.

This report investigated the differences in how different generations voted in the referendum on Britain’s membership of the EU in 2016 by analysing data from Waves 8 (pre-referendum) and 9 (post-referendum) of the British Election Study, a longitudinal online panel survey with a nationally representative sample group of over 20,000 respondents. It employed an innovative methodology which consisted of using both binary logistic regression analysis to model which demographic and attitudinal characteristics were associated with voting Leave across the whole population, and latent class analysis to model how Millennial voters could be subdivided into four distinct “tribes” of voters who were motivated to vote in particular ways for specific reasons.

This report (which was part-funded by Legal & General PLC) used, in an innovative way, methodological tools that were originally invented to measure the extent of racial discrimination in US cities by applying them to measure the likelihood of different age groups living in the same neighborhoods in England and Wales across time. Using the Index of Dissimilarity, the Index of Exposure and the Index of Isolation to small-area population estimates from the 1991, 2001, and 2011 censuses and the 2016-based national population projections revealed that young and old have become significantly less likely to live within the same neighbourhoods over the past 25 years. It argued that increasing age segregation has a number of negative social, political and economic effects and government should modify planning policy to try to encourage more multi-generation neighbourhoods.

How do I generate impact?

One of the main ways in which we generate impact for our research is by collaborating with a wide range of partners from among academia, the media, policy-makers, the world of business and the general public.

IF has strong partnerships with the world of academia, which have led to me presenting my research at academic conferences and giving presentations about my research to audiences of academics and students at the University of St Andrews, LSE, UCL, Warwick, Leeds, Manchester, Groeningen  and Cambridge. We have also partnered with news organisations to guarantee exclusive coverage of our new reports on the day they come out; for example, for our 2018 IF Index we collaborated with the BBC to launch it as an exclusive news story, which led to it receiving almost 750,000 pageviews in one day.

IF’s research is fed into the policy-making process through different channels, such as by making submissions to relevant public consultations, select committee calls for evidence and All-Party Parliamentary Groups. I have personally appeared in person as an expert witness before select committees in both Houses of Parliament, at All-Party Parliamentary Groups and before the Low Pay Commission on two occasions. Footage of me addressing the House of Lords Intergenerational Fairness and Provision Select Committee in November 2018 is available here (my session begins at 12:34 in this video). In addition to IF’s work regularly featuring in the national media, we also maintain an active blog where I discuss both my own research and intergenerational issues in general, with a focus on examining the latest data and evidence. The IF blog can be read here. IF also has active accounts on Facebook, Twitter and LinkedIn which we use to promote our work.

We plan to use the funding which accompanies the UK Data Service Impact Fellowship to further these efforts, for example, by holding launch events for our research reports and enabling us to give presentations at a larger number of conferences.

I think becoming a UK Data Service Fellow will enable me to further develop my skills as a researcher and help my work generate more impact by reaching a wider audience of stakeholders.