The impact of Brexit uncertainty on UK exports

Oliver Exton, one of our Data Impact Fellows, explores how uncertainty over Brexit is affecting UK firms which export.

The decision by the British Public to leave the European Union is likely to become a defining moment in Britain’s economic and social history.

However, even two years after the vote and just six months before the UK leave the EU in March 2019, there is still great uncertainty over one of the most important aspects of Brexit: the future trade relationship between the UK and EU.

As one example, over the summer UK Government reports have highlighted the need for increased `no deal’ preparations. In this `no deal’ scenario, the UK and EU would revert to trading with each other under their World Trade Organization Commitments (WTO), which would result in tariffs on over 75% of goods that the UK exports to the EU. The risk that some exporters will face high tariffs has introduced new economic uncertainty for some exporters to the EU and reduced the attractiveness of the EU as an export destination for UK firms.

In a recent paper, with my co-authors Meredith Crowley and Lu Han, we investigate how the increased trade policy uncertainty following the Brexit referendum has impacted the exporting decisions of UK firms.

These magnitudes are economically significant, implying that entry into exporting to the EU would have been 5.1% higher and exit 4.3% lower in 2016 if UK firms had not faced increased `threat point’ tariffs in 2016.

To conduct our analysis we construct a new database of firm exporting decisions to the EU using the universe of UK customs transactions data sourced from the Overseas Trade Statistics in the HMRC datalab.

We identify firm entry and exit from exporting to the EU using each firm’s history of customs transactions, which we then aggregate to each of the 8,000 different types of products that the UK exports to the EU. Then, we match these products to the EU’s third country tariff schedule with tariff data sourced from the European Commission’s TARIC database . Using a difference-in-differences econometric model we are then able to identify the impact of the increase in threat point tariffs on firm exporting decisions in 2016 relative to 2015 (first difference) for products facing different threat point tariffs (second difference).

In figure 1 we show the distribution of UK exporters to the EU across different types of products and by their different exposure to threat point tariffs. 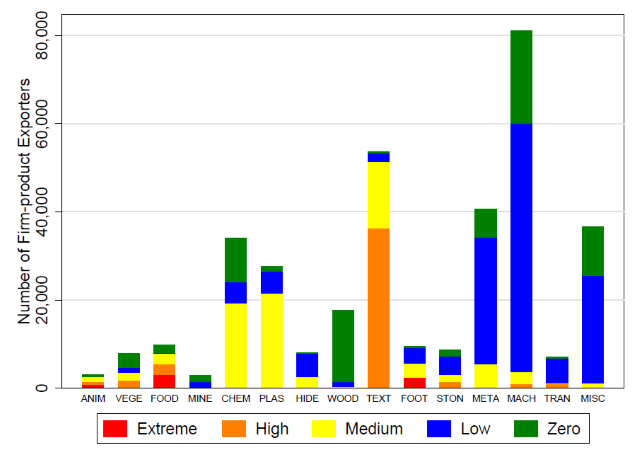 Of the near 350,000 UK to EU firm-product exporters in 2015, 22% face no uncertainty from higher threat point tariffs in the event of a no deal scenario as the EU offers tariff free access to all third countries under its WTO commitments. However, over 60% of exporters would face low and medium tariffs (between 0 and 10% tariffs) in the event of no deal, whilst 15% of exporters would face high or extreme tariffs (over 10%).

Our econometric analysis finds that the increase in trade policy uncertainty decreased firm entry into and increased firm exit from exporting to the EU for UK-based firms following the result of the Brexit referendum in 2016. The impact is largest for products facing higher threat point tariffs, suggesting that UK firms placed positive probability on the likelihood that negotiations could break down and leave some firms facing substantially higher tariffs on exports to the EU.

We conduct a partial equilibrium aggregation exercise to calculate the number of missing entrants into (and exiters from) the EU from the UK as a result of the heightened trade policy uncertainty post-Brexit. This exercise estimates that 5,221 firms did not enter into exporting new products to the EU in 2016, whilst 3,850 firms exited from exporting products to the EU in 2016, in response to the uncertainty and tariff risk associated with renegotiation of the UK-EU trade agreement. Overall, entry into (exit from) the EU would have been 5.1% higher (4.3% lower) in 2016 relative to a counterfactual of zero tariffs on all products and no uncertainty about future tariff rates.

However, as entrants are small in terms of value, a large change in the number of firms entering into does not generate a large aggregate impact on the value of exports in the first year following a change in trade policy. Specifically, we estimate that the decline in entry reduced the value of exports by between £226 million and £1.4 billion in 2016, a small total value relative to total exports to the EU in 2016 of £140 billion.

Overall, our paper shows that trade policy uncertainty around the renegotiation of a trade agreement can significantly deter exporting when there is a possibility that tariffs could increase if negotiations break down.

Whilst the impact on entry and exit has been large, even in just a short time period, the effects on aggregate trade value have been small. However, it is well established that a significant proportion of future trade growth comes from new entrants and hence the reduced dynamism arising from the uncertainty around Brexit could have an even more significant effect in the future.

Oliver Exton @oliver_exton is one of our UK Data Service Data Impact Fellows for 2017. Oliver is an ESRC funded PhD student in the Faculty of Economics at the University of Cambridge whose research focuses on firms and workers in international trade.